“Building your own leadership game”

“More to the Game”

A personal leadership system of operation

“Who are you practising at being?”

It is effectively the best of the designCEO Leadership Masterclass experience in a content rich offering.

The 2022 Masterclass Dates have been locked in:

We will keep the room open for a further 30 minutes at the end of the day.

To build your personal leadership game

It will be compelling and motivating, understanding that a core component of leadership is to inspire change.

It builds around storytelling, the deep personal leadership learnings, the wins and the losses.

It has been developed for you, as well as members of teams, a direct result of the demand and challenges placed on leaders during these times. I am confident it will make a difference.

The teaching has been described as profoundly simple, yet simply profound.

This program is appropriate for anyone:

Currently in a leadership role
With aspirations to lead in the future, or
Wanting to lead a better life.

The most inspiring and effective people I have met are not the most talented or gifted; they established outstanding habits and rituals to lead their best life.

From this masterclass, you will have:

Cameron is a CEO, leadership coach and strategist.

Cameron works with CEOs and emerging leaders to achieve high levels of trust – personally, culturally, strategically and organisationally – as the basis of high performance.

After cutting his teeth as a recruiter at the Melbourne Football Club when the Demons made the finals for the first time in 23 years, Cameron was appointed CEO of the famous Richmond Football Club at age 24, the youngest in the history of the game.

For most of the next 25 years, he was CEO of Richmond, Melbourne and Fremantle, when those clubs were at their lowest ebb, both on and off the field.

He is the second longest serving CEO in the modern game. Having taken on some of the sport’s most difficult and daunting challenges, Cameron established a track record of building teams and organisations, unifying groups while navigating periods of genuine adversity and complexity. He is a legacy-focused leader who has bounced back from setbacks, taking on the sport’s most challenging leadership roles.

Cameron holds an MBA and Master of Marketing from the Melbourne Business School. He has also completed the Advanced Management Program (AMP) at the Harvard Business School and is a Vincent Fairfax Fellow of the Centre Ethical Leadership at University of Melbourne. He received his Coaching Certification from the Columbia Business School in New York.

His articles on sport and leadership have been published in The Age newspaper.

Cameron is also an artist and illustrator, studying Fine Art at the Victorian College of the Arts (VCA). 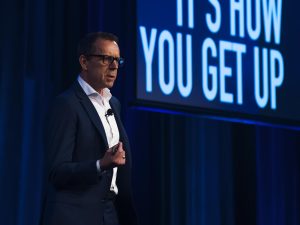 “​I have had the privilege of listening to Cameron talk about leadership and life twice now. I was so impressed the first time that I asked him to present to my Leadership team .

You could have heard a pin drop on each occasion and everyone , sports enthusiast or not ,  got so much out of the session. Cameron tells a powerful , entertaining and deeply personal story that resonates with everyone who has experienced change and challenge.”

Probably the most insightful and Inspirational day of my life.

So proud and excited by the people at RUBIX, about what we have achieved, and the amazing company we are building to help our clients and the Melbourne Analytics and AI Community.

I was fortunate enough to attend Cameron’s designCEO Leadership Event after following his content on LinkedIn for some time.

This was by far the best professional/personal development session I have ever undertaken and I could not recommend it more highly. Engaging, relatable and at times deeply personal, I was hooked from start to finish.

Cameron discussed a number of key learning theories and steps which I will start implementing from today to make me not only a more effective leader, but better person/husband/father/friend.

You are an incredibly powerful storyteller (it helps to have great real-life characters too!) and I found myself hanging off every word.

It inspired me to be a better story teller. That said, there was always a link back to leadership which was very engaging and clever. As a sport lover I resonated with your approach to leadership.

I think the greatest compliment of the day I could provide it that I felt really challenged. Challenged to think more clearly about who I am, my values and to think about how I lead now and how I want to lead in the future.

Inspiring and thought-provoking. I personally related to Cam’s life experiences and gained a lot of strength from his presentation. The CEO[Q] Model made a great deal of sense.

My role as Principal of Caulfield Grammar School affords me the privilege of observing many outstanding leaders and speakers from a number of sectors. Cameron sits right in the top echelon.

I value authenticity and humility above all other leadership attributes and Cameron exudes both. He develops trust in his session quickly and shares raw and vulnerable stories of his own journey.

The human side of Cameron is there for all to see.

The care and attention to detail in all elements of the day showed me that he genuinely cares for his participants.

Cameron has the academic background and lived experience adding integrity to the day. His delivery is in plain speak, he cuts to the chase and he has high expectations of his participants.

When you invest in a full day to be offline, you want tangible learnings to use in your own context and the session delivers this in spades.

Having heard Cam speak before, I really wanted him to present the keynote at the Sport NSW Industry Conference.

The feedback to this presentation has been overwhelming with people taken aback by the vulnerability, the openness and the sheer depth of the content.

There is so much to take in and so much to learn with Cam that you wish the sessions would never end.

I simply can not recommend him highly enough to anyone who wants to learn more about life and leadership.

Having participated in countless personal development activities over my working life, I can say with some certainty that what Cameron has created stands apart from the norm.

It is a compelling experience for any CEO looking to breakthrough in their engagement with their stakeholders – Boards, employees, customers.

It is also immensely inspirational and we all need some reinvigoration from time to time.

I am incredibly thankful for the opportunity to have experienced the Leadership Masterclass with Cameron Schwab.

Cam is incredibly generous in what he shares – of himself, of his knowledge, of his thinking – resulting in a very intense, content rich day.

There is still much for me to synthesise from the day, and whilst I feel that there will be many learnings that will probably take time for me to truly grasp and know how to apply, fundamentally much of what Cam shares is practical, transferable and real.

I attended Cameron’s workshop in 2018 and left feeling empowered, energised to undertake some steps to take my journey to the next level.

As an Aboriginal woman, I found his storytelling engaging, powerful, authentic and meaningful.

I would highly recommend designCEO to any CEO whether for the first time or later in a CEO career.

It’s an inspiring learning immersion with so many practical tools to apply and affirming experiences of others to learn from and apply.

The best three-day workshop I have ever been to as a CEO.

Former CEO, Beyond Blue and Lifeline

I recently had the pleasure of attending two leadership workshops with Cameron. I found that they made me really question myself as a leader, and what I could be doing better for my team and myself.

The sessions had the right balance of teaching and interaction, and we were provided with really simple, effective tools to bring these techniques to life. I found

Cameron practices what he preaches, and his teaching comes from a place of honesty and belief. I would highly recommend the program to anyone wanting to challenge themselves and improve their leadership capability.

The deep sense to engage, be present and trust the journey over the day was very strong.

It is not often personal introspective was explored first and strategies offered in the second part really prepared you for better options in approaches within teams, as a person and involved in an organisation.

Thank you! On behalf of our company Bonfire I thank you for the positive impact you have had on our team and CEO.

Cam has reached a unique point in his life where he is able to condense and express years of learning into practical applications.

His stories of sport and life resonate with all of us who grew up dreaming of the MCG and being a part of the action. His vulnerability, storytelling genius and artistic talent make him a unique and highly effective educator.

Thank you for the most impactful, authentic and connected business presentation I have ever heard.

You did what other presenters don’t with their audience: you made us feel.

Change does not come from our minds, but from our hearts. Everyone who heard you has already started to change.

NO EXCUSES… my team was given 20+ years of high-performance expertise and training from high-pressure people organisations into 24 hours with all the language, tools and frameworks to take our company to the next level.

It’s up to us now to own the outcome.

No matter your story or journey everyone has a path and it is up to you to use all the tools available to make the most of this.

Cam reminded me that everything we experience in our lives happens for a reason and that by being creative and fleshing out these experience we all have a richness that makes up our story.

Finding ways for self-improvement and forming better habits for life can only mean that you will live a fuller life.

Such an empowering master class with Cameron.

The level of detail and how deep Cameron goes is so inspiring.